The Conclusion of 2021 Biennial Conference

The Conclusion of 2021 Biennial Conference

On opening day, FCC Commissioner Jessica Rosenworcel presented the keynote address, followed by a town hall meeting with FCC officials from the Consumer and Governmental Affairs Bureau and its Disability Rights Office. 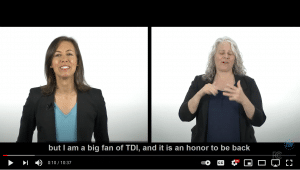 Jessica Rosenworcel gave her keynote address in the ready-made video with CDI on the right during the zoom conference.

Kaika, the TDI CEO, hosted the fireside chat with President Bobbi (Gallaudet University), Barbara Kelly (Director of HLAA), and Howard Rosenblum (CEO of NAD) discussed creating accessibility policy, being active in creating a diverse, inclusive, and equitable experience, and what the world may look like now that we are adapting to hybrid virtual and in-person models. 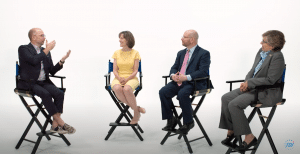 TDI hosted the awards recognizing note-worthy individuals and organizations for their tremendous contribution to the DHH community.

For the rest of the three days, there were breakout sessions and community forums discussing the issues and improvements in technology accessibility, relay services, and tele-world. The Biennial Conference hosted speakers representing various parts of the industry sector and government as well.

TDI greatly appreciated its conference sponsors for their continued support in shaping an accessible world. TDI’s Biennial Conference would not be possible without the support of these partners.